In the most unlikely rural neighbourhood that is a stone’s throw from the skyscrapers in downtown Vancouver is a plant nursery that is unlike any other I have visited in Canada, perhaps even North America.  It is called Southlands and it was brought back from the brink by Thomas Hobbs and his partner Brent Beattie in 1991.

This is the kind of display that you’ll see in the parking area as you approach the hand-made display benches constructed by Beattie.  In this beautifully orchestrated arrangement are giant canna lilies and tri-colour phormiums all of which encircle a beautiful terracotta still-life with succulents, like the one below.

One of the things that makes this nursery so special is the interior greenhouse space.  They house an amazing selection of orchids and tender plants, as well as beautiful planters and accessories. 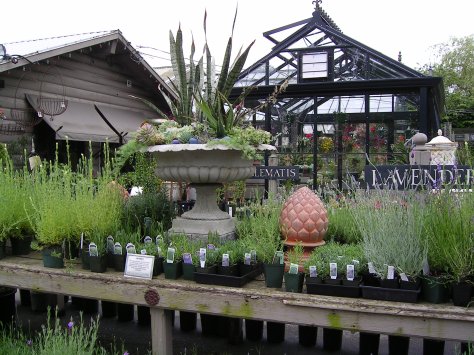 Displays are impeccably organized, with pots arranged and planted as if they’re a display at the Chelsea flower show.  Indeed, this space does owe much to the British tradition of gardening and plant display.  Many of the planters and ornamental terracotta are from Whichford Pottery in the UK (someone should talk to them about their website; Thomas?) 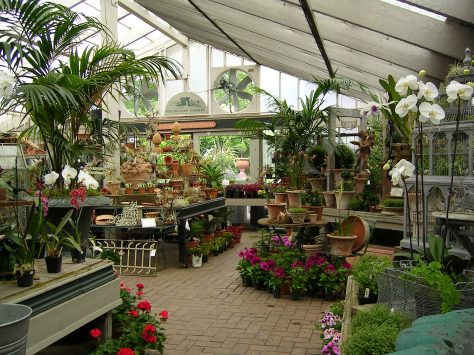 Here the planters are filled with Tillandsia, known as airplants, a tender plant that doesn’t require soil because it is an epiphyte and takes its nutrients through the octopus-like foliage when it rains (much like orchids and bromeliads), rather than from the earth.

This display of bromeliads, tillandsias and impatiens in lead-grey planters is colour genius.

Arrangements of succulents in never-ending shades of grey, silver, blue and purple-black is a favourite.  These jewel-like displays fore-shadow the publication of Hobbs’ books, Shocking Beauty and The Jewel Box Garden  in 2004 and 2005, respectively. 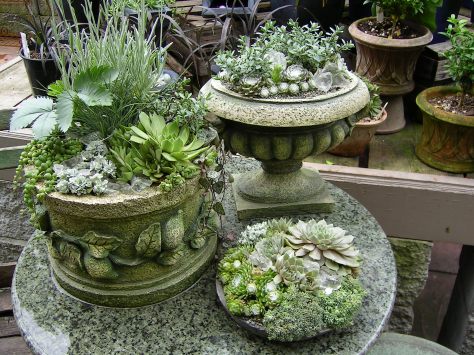 Thomas Hobbs has been somewhat inspirational to me;  I had his displays in my mind’s eye when I arranged many of the much smaller vignettes in my store:

The counter area where your purchases get gift-wrapped is perhaps the most impressive I’ve seen! 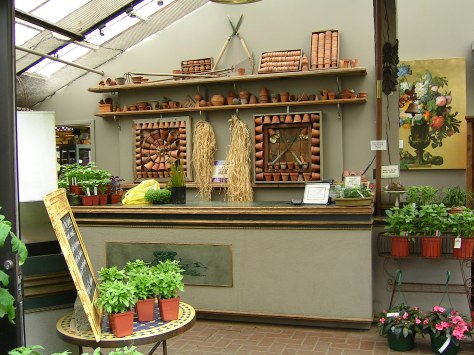 But one of the most inspirational things about Thomas Hobbs is perhaps his advocacy.  In 2009 he put his money where his mouth was and taped a television piece on the imminent closing of the Bloedel Conservatory in Vancouver.  When the network showed a reluctance to televise it, he threatened to walk if they didn’t.  They didn’t and he did.  Bravo!

In the end, the landmark was saved, due in no small part to Hobbs’ own voice and his ability to generate public concern and outrage.  Go here to his blog to read the whole story.

Maybe my friend Laurel in Vancouver will be able to give us an update on both the nursery and the Conservatory.

Follow HORTUS 2: There is life after retail on WordPress.com

There is life after retail

Follow HORTUS 2: There is life after retail on WordPress.com
I'm Ailsa and this is my blog. It started as a blog about gardening and gardens, but is really about whatever I fancy. But there will always be gardens...
%d bloggers like this: